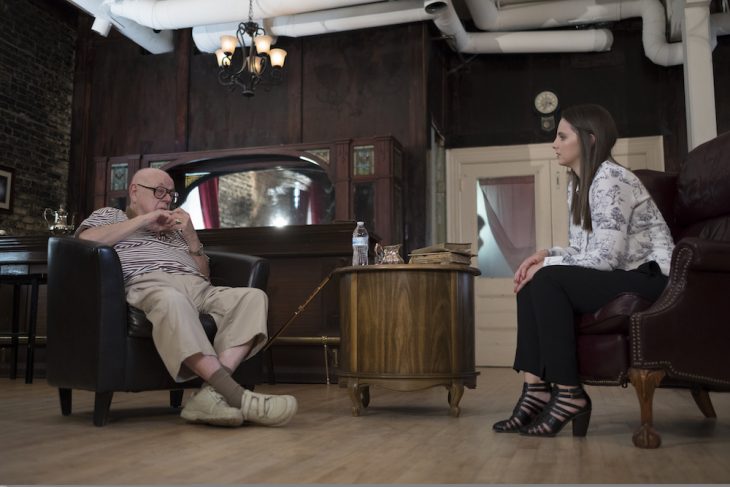 Monica Nevi is one of Seattle’s more accomplished comedians, so naturally she moved to LA last year. A Renton native and former Seattle U basketball player, she got into standup after a career-ending injury and has been performing on local comedy stages since 2011. She’s also the co-host, with fellow Seattleite-turned-LA-transplant Mike Coletta, of the long-running Hug Life Podcast. Onstage, Nevi pairs a world-weary attitude with a wicked wit.

Her latest project veers slightly from the comedy path without departing it completely: a documentary webseries exploring the worlds of octagenarians. 80 for 80 features Nevi interviewing very old people, overlaid with the editing tropes and over-the-top dramatic intensity of a sports documentary, in the manner of ESPN’s 30 for 30. It was shot by documentarian and unofficial Seattle comedy chronicler Ruben Rodriguez and directed by Richard Kilpatrick, with production assistance from Maddie Downes.

The webseries premieres this Saturday at the Carco Theatre in Renton, followed by a behind-the-scenes blooper reel and a Q&A between Nevi, Rodriguez and Downes. I caught up with Nevi to talk about the project.

What inspired you to create 80 for 80?
In February my grandfather passed away and I had all these questions for him [about] how he felt about his own life. I had this idea to interview people who are that old—over 80—because I thought they’d give more candid answers to the questions we ask [older] people: What is life about? How do you be happy? They’re gonna say whatever they think.

Did you learn anything?
They’re done sugarcoating stuff. The thing that’s pretty resounding to me was that everything revolved around relationships, the people they had in their lives. Partners, friends, kids—relationships were what meant the most. They had more vivid stories about those things, as opposed to what they did for work or whatever.

Did they appreciate having their brains picked?
A couple of them just liked the attention. A couple of them were trying to teach me something. Some had a tough time with how old they were. There are a couple darker parts in it where one of them is like, “Sometimes when I go to bed I hope I don’t wake up.” But some of them were also pretty proud that they’d made it that long and got to see so many things.

You’re in LA surrounded by a culture of youth and vitality and beauty. This is quite a contrast.
Maybe that’s why I was so drawn to it—it grounds you a bit, thinking about your own mortality. Maybe it was a little escape for me to think about deeper things. But it’s still funny and very comedy-focused!