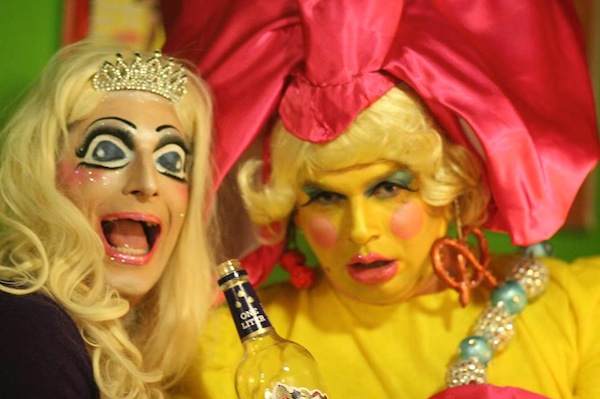 I woke last month to an all-caps Gmail chat message, next to a theatre ticket link, stating simply, “WE HAVE TO GO TO THIS.” My girlfriend was combing through local theatre listings for work and stumbled upon something called the 8-Bit Theatre Festival, produced by The Schoolyard and advertised as a series of short plays and vignettes about old-school video games.

I agreed immediately. After all, her work in theatre and mine in video games had never combined so serendipitously.

Lord help us if it ever does again.

On Friday, we entered Seattle’s Re-bar knowing full well to check our expectations at the door. Re-bar’s revolving door of events—goofball comedy, rockabilly bands, themed burlesque nights, electro dance parties—has only an alternative bent as a common thread. So it’d be weird, probably, but if it wasn’t also good, at least it might turn out to be a spectacle? Nope. Instead, we got ambivalence.

From the outset, 8BTF struggled to answer a crucial question: What shape should such a fan-service production take? Is a “retro gaming theatre fest” a safe haven for gaming’s biggest geeks, thick with in-jokes and “you played every Mario game” minutiae? Or should it connect to gaming on a broader, cultural level a la Wreck It Ralph and tell convincing stories that don’t require an instruction manual?

The 8BTF couldn’t pick a side. Its eight short plays, preceded by a badly rehearsed cover of Lana Del Rey song “Video Games,” came and went with no continuity in purpose, let alone content. The first scene saw two men dropping quarters into an old-timey carnival machine, which made a burlesque dancer appear, as if she were a robot—a bizarre choice, considering every other mini-play revolved around video games.

One saw Super Mario and his later-era sidekick Yoshi argue about their careers taking the wrong turn. This scene was aiming for an existential, self-aware take on the Mario franchise, with chatacters complaining about employment and “damsels in distress,” only to bury its head beneath fan-service comments about lesser-known characters. Novices didn’t get the point; die-hards didn’t enjoy any sort of fanboy-worthy payoff.

The night’s best scene played like a polished Saturday Night Live skit, starring Ms. Pac-Man as a washed-up drag queen, 30 years past her prime, alternating between torch songs and drunken ruminations. The jokes ranged from easy, universal puns (“why don’tcha take a pixel, it’ll last longer”) to pointed comments on the game (“my figure’s thanks to a shitload of cardio and a diet of small fruit and pretzels”). This was the skit of the night worth hamming up, and Scott Shoemaker’s melodramatic charisma guaranteed that even the groaniest material earned laughs.

But even this scene got snagged in the Fest’s ramshackle gears, as half an hour later, a slam poet dressed as a Pac-Man ghost took the stage to recycle many of Shoemaker’s jokes—and, resembling an unpolished SNL skit, overstayed his welcome. The rest of the mini-plays had gaming in common, but little else. A burlesque number saw its star disrobe into different Mario power-up styles; a ponderous monologue about a sexy adventure failed to manufacture any sizzle; and a conversation between two game designers had the distinct honor of being as boring as the development of a video game.

Gaming and theatre don’t have to get along so poorly. Some older shows I’ve seen, like Action Castle, ask the crowd to participate and interact, thus redeeming even the silliest stories with great improv opportunities. Perhaps a longer production with more continuity could speak to the hobby’s mix of humanity and technological distance; who’s to say recent nerdy books like Ready Player One couldn’t have decent stage adaptations?

This, instead, was a failed experiment. 8BTF threw too many disparate pixels against the wall and hoped they might stick. It’s easy to imagine what a growing audience of combined theatre and gaming fans might one day produce. As with most video games, though, we’re probably better off waiting for the next generation.