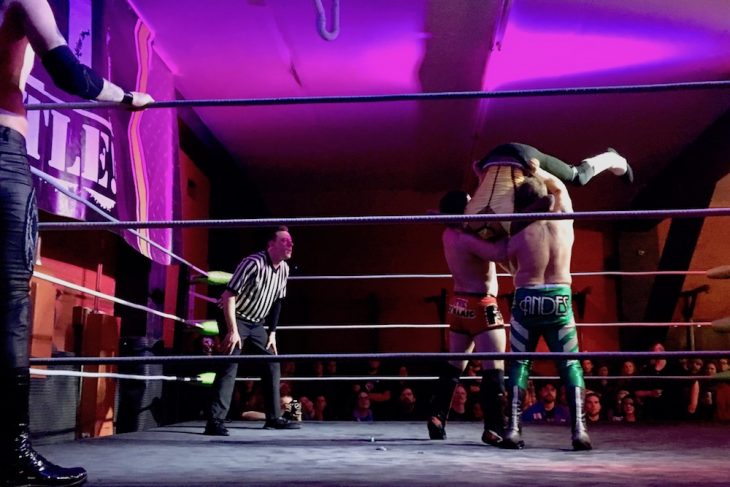 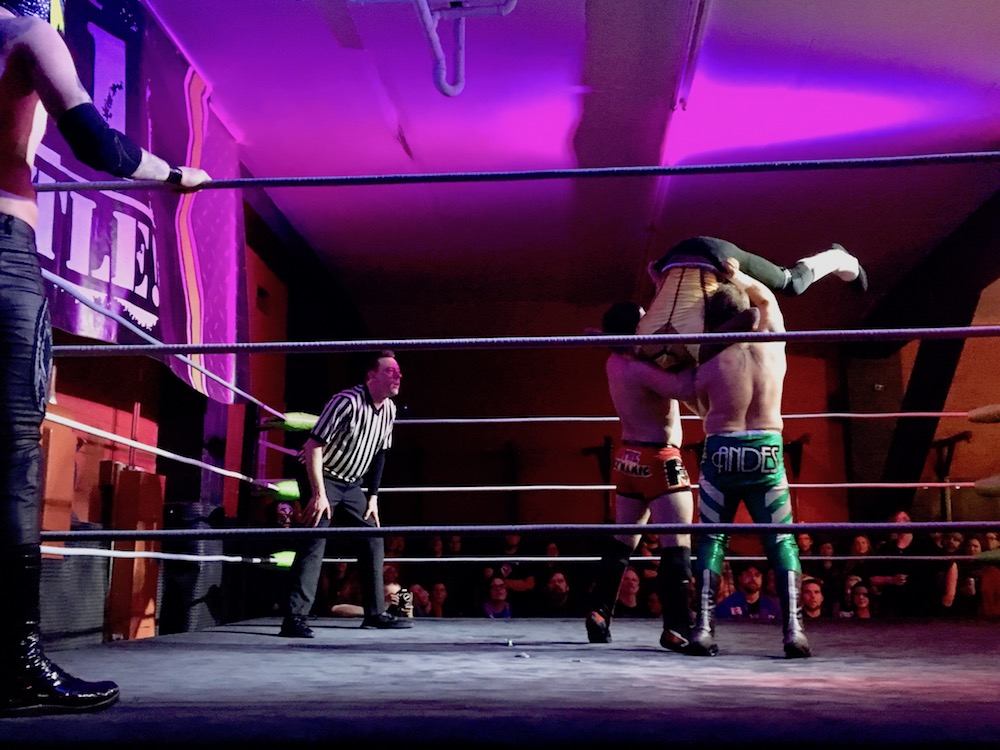 Like many little boys, I loved pro wrestling when I was young. I watched Hulk Hogan’s Rock n’ Wrestling every Saturday morning, and howled with despair when Hogan got smashed with a guitar by the despised Honkey Tonk Man. I even had a favorite wrestler: Junkyard Dog. All I remember about him was that he lived in a junkyard, wasn’t in particularly good shape, and his entrance song was Queen’s “Another One Bites the Dust.” What’s not to love?

Discovering that pro wrestling was scripted and staged was, for some reason, a deal breaker for me. I turned my back on the sport at age 12, even looked down on my fellow middle schoolers who still wore Hulkster t-shirts. Those guys were rubes, saps. But the more I ignored it, the bigger pro wrestling got. “Stone Cold” Steve Austin, The Rock and John Cena became household names. Hell, the CEO of the WWE is currently serving in the Trump administration. I just didn’t get it anymore.

Watching 3-2-1 BATTLE! at Evolv Fitness in South Lake Union (henceforth known as the Battle Palace) changed that. The culmination of over fifteen years of DIY Seattle wrestling culture, 3-2-1 is like nothing I’ve seen in this town. If you ever want to watch the supposedly laid back citizens of Seattle trade in their famous passive aggression for aggressive aggression, you should check it out. I attended a match last week, and I’ve never heard the word “fuck” so many times in such a short span. Nor have I seen so many middle fingers. So many middle fingers.

3-2-1 BATTLE! is like an insane, hilarious church service. The people performing in and attending these shows (matches? meets? tournaments?) are definitely doing some spiritual cleansing. In a city not known for its overflowing passion, there are no neutral emotions on display at 3-2-1. There is pure, unmitigated love for the “faces” (good guys) and other popular characters, and pure, unmitigated hatred for the “heels” (bad guys). When the combatants are announced, the faces wave, preen and soak up the adulation of the crowd, and the heels antagonize and exchange middle fingers with them. When a heel named Christian Andes took to the ring, the young lady sitting next to me stood up and screamed “nobody fucking likes you!” And that’s the only thing she yelled I’d even dream about putting in writing.

It’s all in good fun, of course. Well, sort of. The world of 3-2-1 exists somewhere between winking irony and deep sincerity. Everyone is in on the joke, but the joke isn’t funny if it’s acknowledged. Jake Stratton—a 3-2-1 producer, longtime wrestling ally and known associate of the Kiwanis Adonis—described it to me in terms of self-conscious belief: “A ‘mark’ is a wrestling term for somebody who believes it 100%.  But there’s also something called a ‘smart mark,’ someone who is so above the show that he ruins it for himself.”

That would be me.

Because of this vast feedback loop of creativity, 3-2-1 has all the trappings of traditional pro wrestling, filtered through a distinctly Seattle sensibility. “There is a massive, storied past with pro wrestling in this town,” says Thom Swanson, a 3-2-1 producer and commentator. “We took that untapped love and gave it the grimy Seattle Underground twist.”

In the Battle Palace, a moody duo of black jeans-wearing goths known as the Legion of Gloom is wildly popular, while more traditionally buff spandex types are booed mercilessly. At one point, one of the commentators faux-chided his partner for “body shaming.” There is also a consistent emphasis on laughs—the show opens by blasting the theme from ‘80s edutainment show 3-2-1 Contact for crying out loud. It’s practically a comedy show, though nobody involved would ever describe it as such on record.

True enough, though I may have to remove myself from the “hates wrestling” category after seeing 3-2-1 BATTLE! Beyond the genuine laughs and the tight production, I also came to appreciate the craft of staged wrestling after seeing it up close. There are some amazing feats of athleticism involved—who gives a shit if it’s staged? I can barely pick up a jug of milk, and these guys are tossing their opponents around like throw pillows. It’s also got a gleefully hostile, community vibe—an hour into the show, even I was screaming F words at bad guys.

“Pro wrestling is not meant to be watched alone,” Swanson explains. “It is a visceral, emotional force that causes large groups of people to unite and feel. Pro wrestling is love. And if you don’t agree, then I will love you in a steel cage match to the death.”