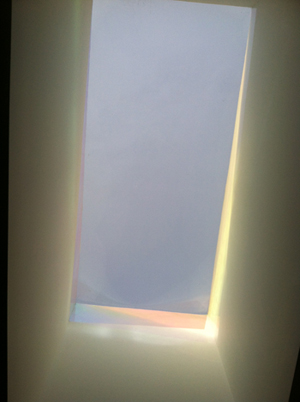 I am only bringing this up because everyone I know has brought it up to me, their mouths agape as though it were soap-opera grade scandalous: Tessa Hulls’ work looks just like Stacey Rozich’s.

I don’t really think it’s that bad. Neither of them invented the folk art-inspired style of painting—a style that can be readily located in a bazillion children’s books. “But hell, if Stacey Rozich can stake a claim on a style like that and people defend her for it, good for her,” someone said. I assume it’s just a matter of timeliness and zeitgeist. One month it’s folk monsters in geo-pattern jammies, next month it’s pennies. These things happen.

Anyway, Rozich’s Within Without Me opened at Roq la Rue on First Thursday, as Hulls‘ How Goes the Battle? was shuttering at Joe Bar. 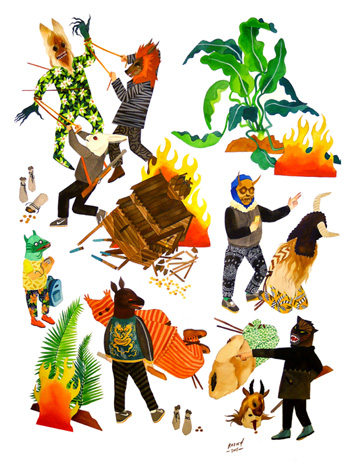 It’s a really great exhibit. Even though Rozich has been one of Seattle’s ascending stars for a few years (she won the coveted $25,000 Neddy prize in the painting category last year), she hasn’t had a solo show of quite this stature before. And it made me a fan….because, truthfully, I’d been a little on the fence about her work in the past. Of course, it’s always been beautiful, but it arguably lacked narrative depth.

Within Without Me rectified this with its surprisingly bleak narrative that claims to depict “the light and the shadows of faith, devotion and the power of lies.” I see more shadows than light, which includes lots of sauced up drunks, masked monsters with shotguns, decapitated beasts, spiritual elders hoarding piles of coins (blood money?), and shrouded corpses waiting to be devoured by blackbirds. One painting called We All Play The Same Games shows masked monsters crouching on the ground playing cards, empty booze bottles scattered around, while a person in a gimp mask cradles a distraught, rabbit-headed companion. In the background, a snow-white yeti lurks behind a leafy houseplant. These monsters are trigger-happy, and they’re especially scary because they’re so…human.

Her opening was packed.

GLOSS
Over at Punch, Dylan Neuwirth and Jeff Gerber are showing a bunch of super-polished, hot rod culture-inspired sculpture. Piles of folded blue jeans coated in glossy enamel are stacked neatly on cinder blocks on the floor. A diptych of large, black paintings made with spray paint car enamel and clear coat are supposed to reference the hoods of cars. As I leaned in to have a closer look, Gerber ran over and said, “the real magic happens on the sides of the paintings.” So I leaned over, cautiously expecting magic to happen. Some pink paint had stained a raw wood edge.

“They are ‘empty ritual,’ a constant theme in the works,” says Gerber. “We always prepare for monumental events that many times end with an underwhelming result. Growing up in a hot rod culture, I have seen more Bondo and dreams, and less dope painted rides.”

That sounds a little like an apology for an underwhelming show. I was underwhelmed, though one woman standing next to me in front of mirror pieces was in raptures, sighing about how great they were. Reflective works of art are always suspiciously popular. 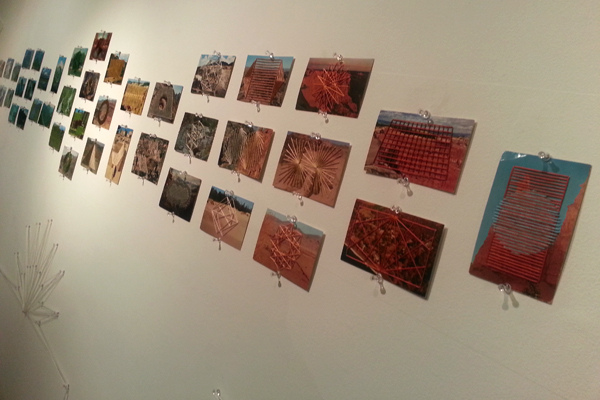 On the other side of Tashiro Kaplan, SOIL’s new member show was anything but gloss. They didn’t even spring for wall vinyl; they just scribbled their names on the wall with colored crayons.

“Thank god for half a xanax and a few glasses of wine,” confided a friend as I walked in. “That’s my sweet spot for getting in the mood for openings.” There you go.

The new members are Julia Freeman, Julie Alexander and Shaun Kardinal. Their work sits well together. The (literal) thread of textile, tactility and touch runs through the show, without getting crafty.

Alexander’s work—mostly big oil paintings—consist of delicious scrims of color, veils upon veils of broad, messy strokes. This isn’t typically the kind of painting that gets me off, but Alexander, a great colorist, manages to make otherwise ugly hues resonate and look good together. Her smaller paintings on scraps of fabric are less interesting—the colors that pop in paintings are absorbed, the gesture muddled, and they feel like quilted doodles.

Kardinal’s embroidered postcards….I won’t lie: the idea of it sounds trite at first, but his execution is meticulous, his use of color and line mesmerizing. Threaded horizon lines melt into the touristy scenery and the effect is illusory landscapes with strange depth. It’s like he’s made lenticulars with string. 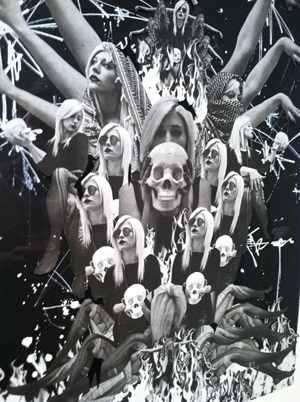 THE FIRST DAY OF THE REST OF….
The Cornish BFA show was Friday night. It was no Frieze Art Fair, but there was certainly some promising student work on show. Outside the gallery, there was also no shortage of balloons, bagpipe music (NO!), free Molly Moon ice cream and hot dogs.

Standing in line for complimentary wine inside the exhibit, two Cornish alumni still paying off student loans refused to throw a few bucks in the donation jar, on principle.

It’s good to know the preppy-perky-magik-goth trend isn’t lost on tomorrow’s art stars. There was no shortage of skulls, Special Effects hair dye and black velvet at the exhibit. Without question, this type of work can go terribly wrong, but some of my favorite pieces at the show navigated the terrain with some class, notably photo collages by Gregory Q. Young and paintings by Rylee Stearnes. Admittedly, I’m a sucker for bottle blondes and shredded tights, and that’s exactly the kind of stuff Young had in his collages, exploding in Kali-like bouquets of hands, legs, feet, flames, skulls and scribbled Whiteout. Walking into Stearnes’ room was horrifying at first: black lights illuminating space crammed with cheesy velvet paintings in gaudy, faux gold frames and light installations sourced from Hot Topic. But as my eyes adjusted to the darkness, so did my heart. A Last Supper painting with a giant broken Twinkie warmed my cockles. As did a bad painting of E.T. and Michael Jackson, a portrait of Martha Stewart with enormous breasts, and framed holographic sparkle paper sandwiched tightly together, salon style. It wasn’t even jolie laide. Just deliciously laide-laide, and super funny. 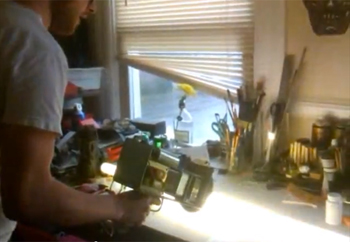 One of my favorite artists coming out of Cornish this year is Alex LeCates—a good-looking, nerdy guy with a square jaw, whose art school uniform consists of dark glasses and a cowboy hat a la Fellini in 8 1/2. His practice, from what I gather, comrpises a fantastic gesamtkunstwerk that mashes Spaghetti Western, Mad Max and a dash of Creamaster-esque mythmaking. His installation at the BFA show is of a patch of sandy terrain with a mylar pop-up tent. Next to the tent are scattered miscellaneous tools and a functional ray gun. (Though I never saw the weapon in action, if you google LeCates, you can find a video on YouTube where he’s demonstrating its slightly underwhelming microwaving capabilities.) Circling around the tent, tethered to a motorized mobile, a watchdog whipping around on a cable does its best to ward off whatever zombies, monsters, or hooligans threaten the post-apocalyptic survivalist. Above the landscape hovers LeCates’ back-lit print made from an ink drawing (see below) of the now-defunct Kowloon Walled City. It hangs above the bleak, imaginary future like a bright memory, a thought bubble or a dream trapped in a passing cloud. I remember when the Walled City existed, but LeCates was probably still in diapers when it came crashing down, so for him the phantom of the cramped skyline serves as a perfect fantasy about what comprises utopia or dystopia, and how those contingent ideals hinge on the inaccuracy of memory and the will to romanticize whatever we don’t have. 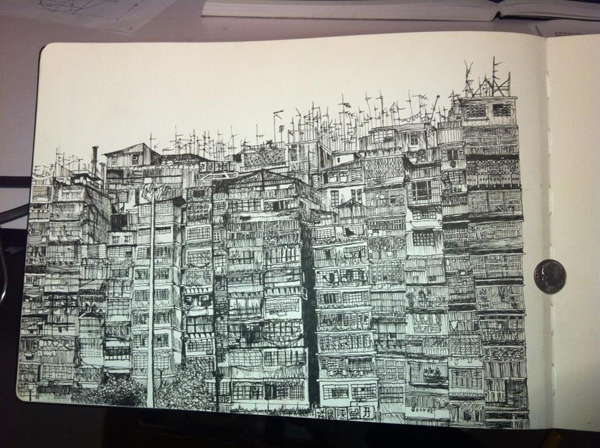 I have no idea where LeCates will go with this mythology, how it will evolve. But I love that he’s obsessed with making functional ray guns, and the penchant for harnessing technology in the spirit of melancholy, dream-like absurdity seems timely. He told me that this summer he and collaborator Caleb Shafer are embarking on a journey in a wooden sailboat (which they built) from Lake Union up through the San Juans. For the duration of the 84 mile trip, they will allow themselves to only communicate in French. Naturally, neither of them knows a lick of French. This sounds like a chapter out of Exploits and Opinions of Dr. Faustroll, Pataphysician.

I covered JD Banke at Vignettes a while back, where I called him “the new NW face of slacker bohemia.” Banke’s work is undeniably solid, even if it’s not your cup of tea, and his corner of the sprawling warehouse-y space upstairs was decked in wall-to-wall squiggles and Sharpie’d witticisms. 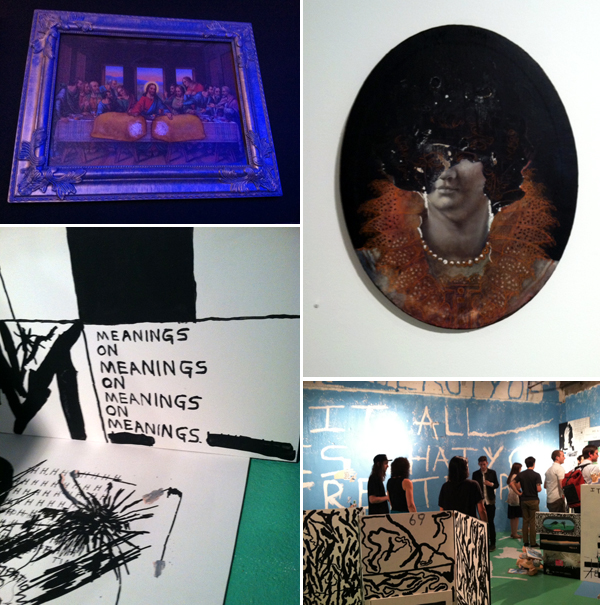 Other artists who caught my eye were Alexandra Manea, whose colored etchings of a girl (possibly self-portraits) in front of a bathroom mirror or curled up in her undies on a bed surrounded by detritus are delicate, haunted and technically great. Also, some of Hanna Myers’ defaced portrait paintings, haunted in a different way, stood out, as did the watery, messy, explosions (“exorcisms”) of paintings on plastic sheets by Sam Whalen. 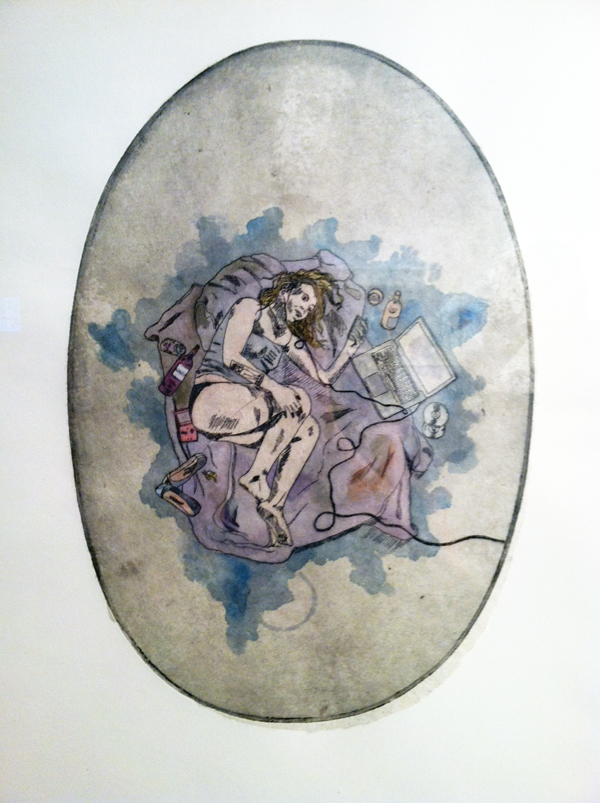 FRENEMIES 4EVER
Friday night was another opening at LxWxH, this time featuring a show of all Portland artists in an attempt to bridge the cultural/emotional gulf between us and our sister city. Proving the point that Seattle needs to get in better touch with its neighbor, I’ve only seen or worked with two of the eleven exhibited artists before: Patrick Kelly, who makes compact, precisely-rendered abstract graphite drawings that literally scintillate with metallic sheen, and Lisa Radon, whose work is incredibly witty, nerdy and poetic. For The City & The City, Radon installed Model No. SW750 Seawise Ind’l Ltd. 120VAC-7-SKV 60HZ  E143427 J197, a negative ion generator, in the gallery’s skylight space. (Negative air ionization therapy ostensibly treats seasonal affective disorder.) Also, in an effort to boost positive vibes, Radon secretly issued talismans to each of the artists and gallerist Sharon Arnold during the exhibit reception. Each little bag contained a stone (an “amplifier”) and an illegible artist statement scribbled on a piece of paper. “They are an invisible net; they work individually and collectively. The collective amplifies each one,” she explained. Classic West Coast hippie gemology meets poetry meets science. Nothing’s ever lost on Radon.

I arrived just in time to catch Sean Joseph Patrick Carney’s RATS OFF TO YA, a stand-up comedy performance complete with projections and song. The audience crowded onto the landing at the top of the stairs by the gallery while Carney’s art jokes rolled out: “How many social practice artists does it take to change a light bulb? Trick question! None. Social practice never changed anything! What’s the difference between Marina Abramovic and Johnny Knoxville? A level of self-awareness.” I lol’d. He sang a song about turning an unwanted baby into a gravity bong, then he passed out a stack of “song lyrics” so the crowd could sing along to a Pearl Jam spoof, “Seattle’s Spoken.” Ho ho! (See some of the set here.) 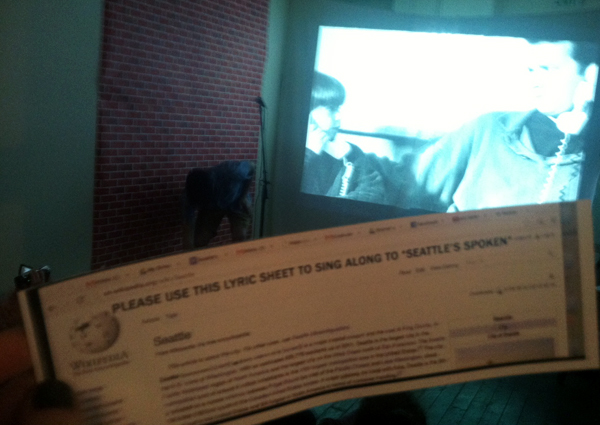 Inside the main gallery space, Laura Hughes’ Turrell-like piece cast shimmery rainbows around the rim of the rectangular skylight and Jason Lee Starin’s ceramic piece Remains coiled on the floor, a glistening, knotted pile of viscera.

THIS WEEK’S IT LIST
Tonight: John Boylan’s Next Conversation at Vermillion. The theme is “Kicking Seattle up a Notch or Two.” While this topic of conversation feels like possibly beating a dead horse, the lineup of guests definitely makes it worth attending: Andrew Russel, artistic director at Intiman, Andy Fife, formerly of Shunpike, now independent consultant, etc, Greg Lundgren of Hideout, Lundgren Monuments, etc, and philanthropist Shari Behnke.

Thursday through Sunday: Saint Genet’s Paradisical Rites at On the Boards. If you don’t go to this, you’re crazy.