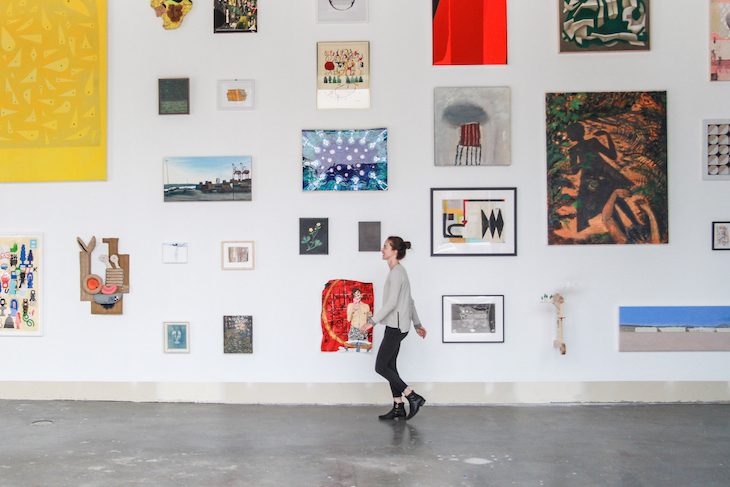 It was one of those lonely Saturdays. Dawna Holloway was just about ready to give into the idea that no visitors would come to see the show in her gallery, studio e. “But then, these three young women came in,” Holloway recalls. “They were so excited about the show we had up. One of them said she’d just moved back from New York to Seattle, and that the show made her feel like it was going to be okay. But what she didn’t realize is how that day, she was the one to gave me a little boost on a day where I could use it.”

The person in question was Colleen RJC Bratton, one of the 50-plus artists included in 1 ROOM, a vibrantly hued group exhibition of Northwest artists. The show, organized by studio e to run concurrently with the Seattle Art Fair, opens tonight.

Hung salon-style on a high wall of a former storage room at the newly constructed Avalara Hawk Tower near CenturyLink Field, the show is a celebration of chiefly two-dimensional work by studio e artists such as Warren Dykeman and Gillian Theobald. Holloway also sprinkled in work by non-represented artists including Anthony White and Tuan Nguyen, as well as paintings by artists from famed local galleries like Linda Hodges or PDX Contemporary Art, with whom Holloway will be splitting commission.

On the whole, the show reads as a homage to the kinship and network of artists and galleries who’ve supported Holloway since she started her gallery four years ago. Which is not immediately clear from, say, the monochrome oil painting of interlocking gray, charcoal and negative space by Whiting Tennis (represented by venerable Seattle gallery Greg Kucera) or a poetic oil rendering of the sky on linen by Linda Davidson (from G. Gibson’s stable). It becomes apparent when Holloway,  who also runs her own lighting business four days a week, explains that when she’s stuck with a particularly thorny gallery-business question, she can turn to Kucera or Gibson for help.

Further down the wall to the right, an intriguing wedge of white towel embroidered with black thread by Robert Yoder, also the director of SEASON gallery, points to another connection. “Robert was the person I called for advice after I did not get into the Seattle Art Fair for two years in a row,” says Holloway. “I could tell you a story about almost every artist in this show.”

Michael Doyle, whose painting of a yellow flower hangs nearby, is helping Holloway with the home stretch of install madness. “This wall is like a party of everyone who has shown up in the last four years,” he says. “Studio e brings together the art community. Really refreshing.”

“1 ROOM is distinctly a studio e event. Dawna is doing the work,” says Sharon Arnold, who’s taking a break from the Seattle Art Fair this year with her gallery Bridge Productions and is bringing work by two of her artists to 1 ROOM. “But it demonstrates a camaraderie. It says something that all these people want to be in partnership together to create this platform to put Seattle artists forward.”

To Arnold, 1 ROOM demonstrates how the prevailing mythology that commercial spaces are more competitive than collaborative is just that: More myth than truth. Or at least the dynamic is changing: “It’s already changing in New York, where galleries are coming together under one roof or people time-share a gallery,” she says. “I think we’ll see a lot more of that in the future.”

The fact that galleries and artists band together or opt for more mobile, perhaps fair-friendly existences, arises from a stewing compound of factors, including dwindling foot traffic and the increasing ease and popularity of art-fair (s)hopping. Another factor is space and who gets—and gives—access to it.

This predicament, of course, doesn’t need to be explained to anyone in Seattle. Nor to Holloway. After having secured three rooms for a group show in King Street Station in 2016, in 2017 Holloway ended up with no rooms after the owner of another space pulled the plug a week before the fair.

2018 was supposed to be the year of two rooms. “I originally thought I’d have this room and another space of around 4,500 square feet,” says Holloway. “One minimally hung studio e group show and then a big show put together by folks from the art community. But then that plan fell through.”

That was six weeks ago. In just that time, she scrambled to do the best she could with one room. As it is now, Holloway says, 1 ROOM provides “room to decompress” from the art-fair madness. The outside seating-area stools are designed by local design firm Fin. There’ll be raspberry lemonade. A golf cart will bridge the 0.4 miles between the fair and show, manned by 1 ROOM artists such as Warren Dykman and other local arts supporters. It’s not written in stone yet who will drive. If Holloway’s sure of anything, it’s that her community will show up.